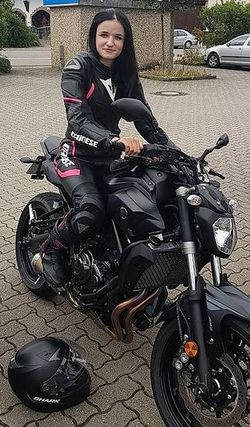 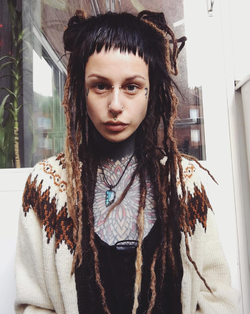 Moving back to the counter, Roxy pushes herself again up onto it, wriggling back to get comfortable, so she can watch you moving around her kitchen and help by pointing out needed items. "Are you able to heal at all yet?" she asks, "Like, how far away from being able to heal yourself are you?". With a crack, the beer is opened and she takes a long drink, puffing out a content sigh at the cool taste. "The pills weren't so bad, they had me seeing some weird things, but the colors were amazing." she chuckles.

Bobbi shakes her head, "Not yet, but I'm getting there. The fabric of reality divides itself up into separate areas. I feel myself getting stronger, learning more. Eventually as they all come together, I feel like this zap of understanding. My leg feels a little better each time. First time that happened I was doing yoga. I could feel my leg and the metal in it, and just figure out how to move just right. I was doing yoga before bed, got myself in this one position, and my mind just expanded out across the whole city, and next thing I knew the sun was rising."

"That sounds incredible.." Roxy replies, gazing off into nothing while she tries to imagine it, ".. I do feel so limited compared to you.", her attention refocuses, "I mean, what I do is still amazing to normal people, but there is so much more out there that I don't think I'll ever connect to.".

With a faint sigh, she lifts her beer for another drink. "I'll learn some sorcerer magic one day, maybe focus on my psychic abilities and see if I can create something new. I don't know.".

Bobbi gives a little nod, but she doesn't seem to sure of this. "Yeah ... I mean, once the door gets kicked in, you might as well go all the way through. I'm still not certain it was the right road to travel, but it's my road now, so I'll hobble on it until I die or ascend." She starts washing the vegetables she has selected. "I thought the psychic stuff just came naturally to you? You think there's a way to codify and learn more?"

"It's like other magic, I guess.." Roxy replies, tilting her head as she thinks of a way of describing it, ".. sorcerers perform certain rites and speak specific words, visualise the end result and release the power.", a glance up to you, "Does that sound about right? It's the same with me, but I skip the rites and words and just visualise what I want to happen, then will it into existence. That's why learning more about medicine helped so much. I learnt how to visualise what I wanted to happen, repairing that torn muscle by visualising the many cords joining back together exactly the way they should be.".

Her smooth brow wrinkles into a faint frown, "It's hard to explain. But I think I could create something new." she nods. "How do you perform magic?"

"There's a language to reality. A few languages. I speak that language and the other me hears it. Realizes my flesh is weak and wanting, and gives me aid and comfort," Bobbi says. "I know there's something more to it though, there is some way to bypass the language. To get to the heart of whatever it is the language touches in the synapses of reality. I haven't figure that out yet, but I try. I cannot manipulate the timelines directly, but I ask her to and she obliges."

"Is that other you a real thing here?" Roxy asks, "Like, a second part of you? Or when you were looking through all those time options.. um..", pondering where she's going with it, ".. maybe the original you is the blue you, and this you is the you that survived..? Or the other way around?" she shakes her head. "This is so confusing."

"Magic hurts my head. Not like, literally, I mean, the whole idea of it is still really crazy.". Lifting her beer, she holds the can on her palm, looks at it with a slight tilt of her head, "If I focused, visualised, forced my will onto this can, I could probably make it levitate. It would take a lot of practice, but I feel like it's a possibility.". She gathers the can again, takes a quick drink. "That's just weird. We have cars and computers and space ships, and we're here talking about making things levitate by the power of thought." she shakes her head.

"There's one for each of us," Bobbi says. "A blue one. They are elsewhere. We float through our own timelines alone, riding the vibrations. When we need to meet, the blue ones talk and agree on the timeline. All the possibilities collapse into that one. We meet. We speak. It's happening right now. When we finish, we vibrate again and go our separate ways. The blue one floats there outside the timelines, guiding our soul on the correct path. That path is not always easy on the flesh." Bobbi begins chopping some vegetables. "I think the blue ones have their own blue ones, but that is outside of my conception. It probably goes further. They say there are seven souls." She looks to you, "And what do you think those cars and computers are? That's just the magick we've been trained to accept. The ones who have trained us that way want to force us to only accept their magick, and for the most part the people oblige them."

Lifting her beer, Roxy finishes the last, then raises, aims, throws and bullseye, lands it straight into the nearby trash. "I think I know what you mean. Like a river with multiple inlets, and each of the inlets are the blue ones, until you need them when they meet at the junction, then travel off again where the river splits further down." she nods. "Are they all in time, or dimensions? Like, is there a different dimension where I have blond hair?" she grins.

"Cars and computers aren't really magic, though. Everyone can put a car or computer together, if they study hard enough." she nods, looking over to watch you chopping the vegetables, "But no amount of study can teach you how to teleport yourself across the room. You have to be um.. what is they call it? Awakened to it?", she shrugs, "I wonder how that happens. Is there something somewhere that pointed at me and said, 'You!', and blam, I can heal people.".

"Something like that. The blue ones sit outside the rivers, and guide them into each other and guide them out of each other. All possibilities exist for every person. However, just because there is a path like that, that doesn't mean it's close. That's why I only made it so I didn't hit my head, as opposed to making it so I didn't mess up my leg. It was already countless deaths to get there, you can imagine how far away something significantly different might be. Would you be willing to experience all the possiblem moments between this one and the one that led you to have blonde hair? Easier to just dye it. That's a good metaphor for magick and the way some abuse it." Bobbi raises an eyebrow at you, "Weren't you just telling me about the magick you could learn if you studied hard enough? You only think that their magick is easier because they made it that way. The less you flex your will, the more power they have. Do you not think I studied countless hours in the pursuit of awakening? I know I might come off as a bit of a space cadet, but I'm nothing if not a serious student. You don't just point and do something, there's a serious language to this. The gifted might make it look effortless, but it is cerntainly not. It's a system. Could you practice medicine just by pointing? No, there's specific training, diagnostics, tests, and practices. Same here, it just looks different."

"Me learning through study is different to someone who.. like.." Roxy tilts her head, looking a little puzzled, before finding a way to describe it. "I have an open door. The knowledge can come in and be used. But for so many people, having the knowledge is all they have, they can't let it in and use it. Does that make sense? Yeah, like an awakening. If you're not there, no amount of study is going to help. Maybe it'll be a path to awakening, maybe someone else has to crash and nearly die to open their mind to it.."

"Phew, this is getting deep." she chuckles. "I'm not even very good at it, I don't know actual learnt magic, I don't use books and weird languages, so I can't even speak about it really. It's all what I've heard from other people."

Bobbi shrugs, "I studied for years before anything happened. Magick is a rigorous academic discipline for me. I know it doesn't seem like that for everyone, but I feel it's always something you must study. It's just that there are different ways of learning. I'm sure you did something to learn how to do what you did. Maybe unconsciously. Things that shaped your brain into it's capabilities. I can't tell you what, or how to codify it for others, but I'm sure this is true."

"Maybe. My father is a doctor and he would teach me things from when I was really young, maybe it did something to my younger mind." Roxy ponders, "But it would have to be there first, or it could happen to anyone." she shrugs. "I don't know, it's the wonders of the universe. Maybe I'll never know." she shrugs, giving a wistful smile.

"How's the meal coming along? It looks good from here.".

"Almost done," Bobbi says as she adjusts some things on the stove. "Why do you think it could not happen to anybody? It happened to you, right? Are you some sort of exception?" She looks to you, "I know I'm not. I was just dedicated. There are more things in Heaven and Earth, Roxy, than are dreampt of in your philosophy." She turns off the heat, looks to the vegetable dish she was cooking, and says, "Plates?"

"It happened to me, but I didn't do anything for it." Roxy explains, "It's just something I became aware of as I aged. I didn't read any book on magic and the occult. I couldn't tell you the difference between a witch and a warlock, I'm so clueless about it all." she chuckles.

"That smells great!". She pushes herself down from the counter and moves over to one of the cupboards, pulling a couple of plates, then a drawer for some cutlery.

Bobbi spoons some food onto each of the plates and takes silverware from you. "Well ..." she says. "I don't think we're going to figure out all the specifics of how and it happens and to, but that's ok. Something happened to both of us, and we're not alone. To Know, To Dare, To Will, to Keep Silence. That's probably why we lack answers to this question." She takes a sip of her beer, "Bon apetit."

Taking a plate for herself, Roxy heads back to the couch and sits herself down; no fancy dining area in her house. "Did it though?" she ponders, "Or was I born this way?". More questions on top of questions, no answers to be found. "I could be an X-Men.." she chuckles, then digs the fork into the food and starts munching.

"Oh, now that's good.." she says after she's finished her mouthful. "You weren't kidding about being a good cook. You're coming over more often." she grins.