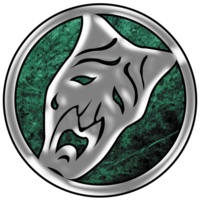 "A kind of abstract thing of evil, he has no nobility, nor does he inhabit the dark world of majestic satanic villains. Instead, he is a lower kind of evil, an obscene and loathsome creature that dwells amid decay and slime and crawling rats."
-Malcolm South, Mythical and Fabulous Creatures

The most visibly cursed of all Kindred, the Embrace warps each Nosferatu into a hideously deformed creature; the archetypal Nosferatu resembles Max Shreck's Count Orlok, though the curse has any number of variations.

The Nosferatu are the spymasters of the dead, collecting information and selling it for a dear price. They are also the masters of the underground, living in the sewers for protection.

Due to their inherent clan weakness, all Nosferatu have Appearance ratings of zero. They may not improve Appearance with experience points. Most Social actions based on first impressions, except intimidation and the like, fail automatically. 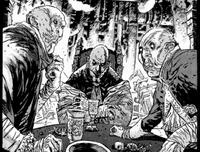 Nosferatu are generally organized into broods; communities centrally located around a sewer system and serving as underground cities which may house dozens of their kind. Nosferatu are stereotyped as ugly on the outside, humane on the inside - this is not entirely true. There are many Nosferatu who never leave the sewers, the Nosferatu make a habit of sending their friendliest to communicate with the rest of the Camarilla.

Nosferatu strongly stress clan loyalty over almost everything else. Given their hideous appearance, they depend heavily on clan support structures for everything from havens to food. Broods are generally gerontocratic, with the eldest Nosferatu setting policy and guiding the youngest. Most Nosferatu can acquire jobs within their clan, including assisting on construction or other survival projects. Most Nosferatu are inculcated with a survivalist mentality and increasing the strength of their havens is a constant preoccupation. The Nosferatu also use ghouled animals as defenses and have created Spawning pools, which are tainted by their vitae and turn, over the course of many years, every animal that drinks from them into a monstrous creature loyal only to the brood.